What is ADA?
ADA stands for Alternatives to Domestic Aggression. ADA is a program that specializes in working with men and women to stop their use of abuse. The purpose of ADA is to end domestic violence and abuse in our community.

How does a woman get into ADA?
By calling 734.971.9781 Ext. 468 to schedule an intake with the RENEW Coordinator or visiting our RENEW page.

How much does it cost to go to ADA?
Tuition is based upon income. Below, you can see the sliding tuition scale. Assessment appointment fees are determined on a slightly different scale. 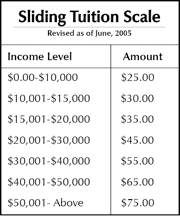 How long is the ADA program?
The ADA program is a minimum of 52 weekly sessions. Groups meet for two hours and are offered in both the morning and evening. Referrals can be made to the ADA Program for any duration.

Can I refer someone to ADA for assessment only?
Yes. We can report our conclusions and/or status of a referral to anyone for whom a service participant has signed an information release authorization.

Does ADA offer services to women who assault their male partners?
Yes! We specialize in offering these services to men AND women. See our RENEW page.

Are all the participants in ADA court ordered?
No, however about 85%-95% of the participants in ADA are court ordered. The rest are what we call “circumstance ordered”, “socially mandated” or “consequence ordered”. We say this because many men in particular come to ADA as a way to save their marriage, keep their partners from leaving, pressure their partners to return if they have already left, manipulate the court regarding child custody or visitation, or to avoid other unwanted circumstances. ADA’s goal is NOT to “save” or “end” relationships – it IS to end his violence and/or abuse.

Who is an appropriate referral to ADA?
If you are concerned about being abusive with your partner, ask yourself these questions and consider them as the warning signs of a problem.

What is ADA’s success rate?
Ultimately, ADA is as successful as each individual is committed to changing their life. We offer specialized intervention services to men and women. If they choose to use our services, they can change their behavior, attitudes and thinking. If they are committed to avoiding change, they will be successful in avoiding change.

What is the recidivism rate for batterers?
Measuring recidivism can be difficult, since there are many types of violence which are not easily tracked. Physical violence is the most measurable type of domestic violence because if often results in arrests and the event can then be quantified. However, other types of abuse, control and violence which may not be illegal are not easily quantified or tracked. Participants who come to ADA are only here for two hours per week. Knowing what their activities are outside of group and knowing how they are being abusive after leaving ADA is difficult to gauge unless they are rearrested. Someone could be verbally abusive and controlling without being arrested.

Why did we stop taking Insurance for Service Participants in the ADA Program?”
History: When we began the ADA Program in 1986 our philosophy and practice were evolving. This philosophy initially grew out of our clinical practice and training. Clinical practice is wholly different from batterer intervention work as we know it today. Today, we do not call what we do “treatment” or “counseling” we call it intervention. Intervention is about education, consequences, confrontation, acknowledgment, identification, etc.

Philosophy: We believe that battering is about the conscious, intentional and premeditated act to control and dominate another person. Battering is instrumental behavior. This is not a diagnosable “ailment” any more than bank robbery or speeding in an automobile is. Further if indeed an individual has a diagnosable illness/condition they would require proper treatment for that. Battering is not an illness or a condition.

Diagnosis: In order to bill an insurance company for services there must be a diagnosis for the “patient” there is no diagnosis for an individual who chooses to dominate and control an intimate partner. If, for example, we were to diagnose an individual as having an Intermittent Explosive Disorder there would be a number of problems.

Law: Most insurance company policies state that they will not cover court ordered treatment. Often times the provider and the company collude to look the other way and not document the court ordered aspect of the treatment.

Consequences: We believe that consequences* (not punishment) are a cornerstone of what is necessary to stop battering. It just does not make sense that a consequence for committing a violent crime could be covered by the benefits of employment/insurance.

Cost: The cost of maintaining a psychiatrist, keeping up with the immense demands of record keeping necessary for insurance billing compared with the revenue generated from the insurance reimbursement was prohibitive. Further our sliding scale ability made it feasible for service participants to pay approximately the same tuition as their co-pay. The trend in the insurance industry is towards treatment of an extremely “shorter duration” than we believe necessary for individuals who batter.